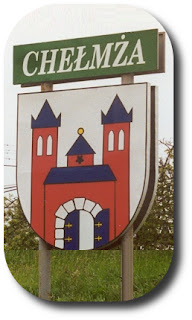 
This adventurous journey started with a flight from Hamburg to Poland's north and there to the city of Gdańsk (in German: Danzig) where I rented a car to explore the country by my own – just to act as I think best... And that was very fine: going wherever I liked, at a speed I like, resting when I'm in the mood, enjoying the route to the very special destination – while it was raining very hard. No problem, I had a dry place in the car. And the feeling of breathing freedom is great. In traveling this way a long dreamed dream came true. Walking "Kulmsee", to the roots where long ago an ancestor had come from, a person termed Culmsee cause he had no other family name but came from a place where a "See" (in German / in English: Lake) called Culmsee is placed (@ Kulmerland = Culmer Land = Ziemia chełmińska).

They named him the Culmsee and from now on a new clan was born. –
Just another imaginable true fairy-tale... and onomastics proofs this. 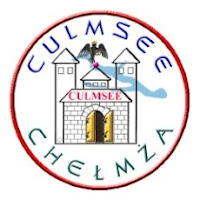 Anyhow let me continue describing travelling. It was difficult to leave Gdańsk because there are very few road signs inside the city [those days]. By pathfinder's luck I had bought a map collection at Hamburg's airport in addition to the road map I have already had – and that was good [long live navigator apps like GMaps]. But then after a long while and after driving several wrong directions I came to # 1 main street towards Łódż. Now it quasi took me almost straightforward. The way led me from Gdańsk southwards up to the approx. 150 km remote Chełmża. But not so fast as it can be thought by a distance of one hundred and fifty kilometers only. Reason above all are the many cumbersome slowly moving lorries that can be passed by hardly only. The multitude of small, smaller and smallest villages do brake additionally. And that's why I had been on the road for several hours. But meanwhile and in spite of the rain I could relax in being amazed at the countryside and in sucking these experiences into me. The feeling of approaching became more intensive in reaching every bigger village's map dot and passing it in real. Now finally:
the first road sign with "Chełmża" on it! 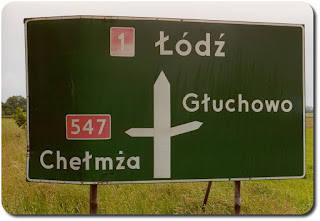 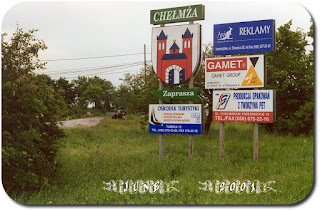 And the sun was shining. From now on the rest of the way wasn't still long. And the way has been the aim to go there...

It was a big pleasure for me!

Maybe some day
You will ENJOY it, too, in travelling there.

In addition to this I added some photographies I took into world wide web onto my homepage's sites:


interested in more details and photographies?
just skip to my webLog
https://axelculmsee.blogspot.de/2017/12/chemza-at-wikipedia.html
with links showing files at Wikipedia / Wikimedia ... 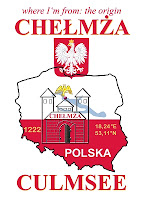 Axel Culmsee
Hello! ... in being Trekkie additionally to my main webLog this is another showcase here presenting my SigmaTau Fleet and many more photo editing works ... enjoy!